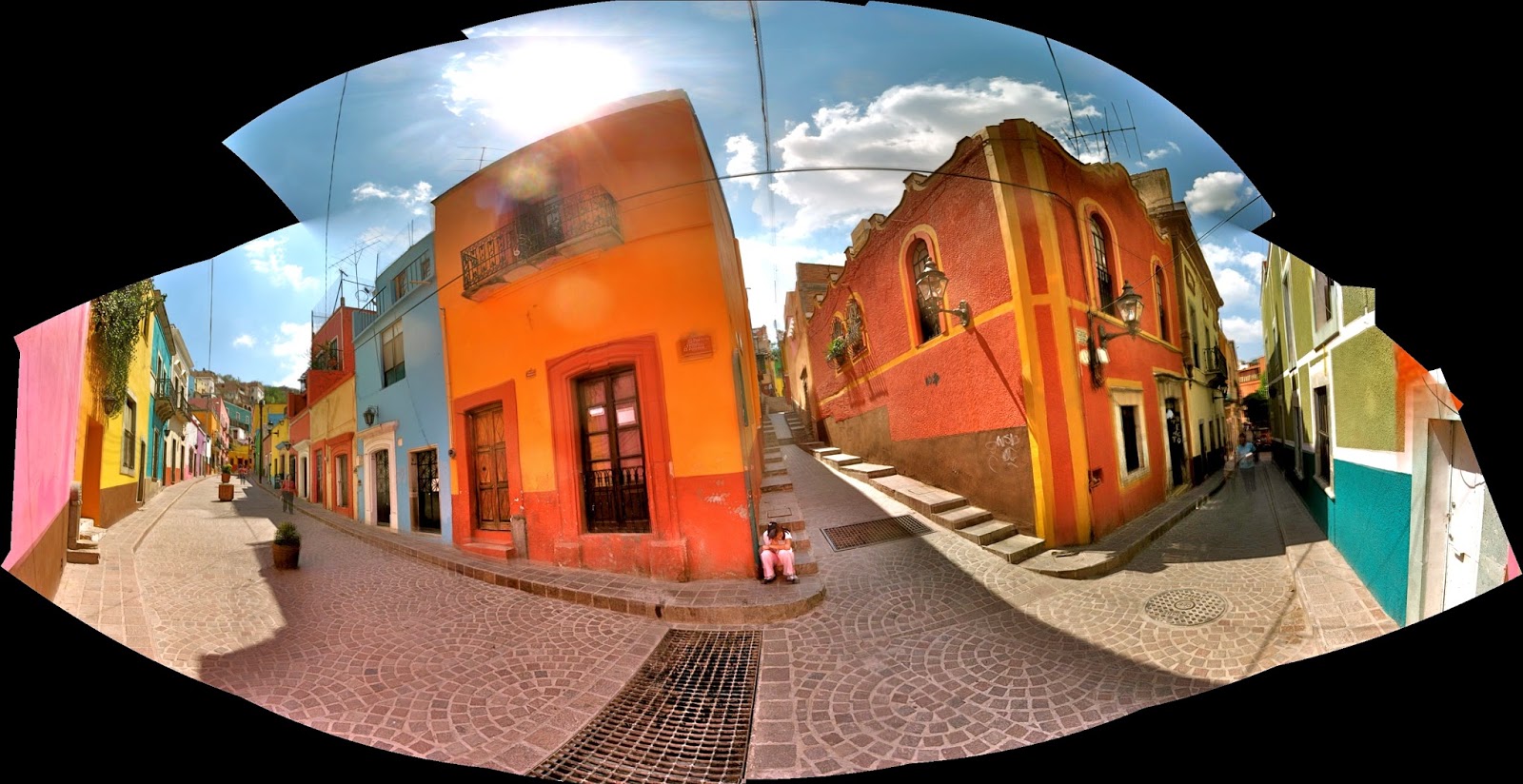 Well, I suppose I should endeavor to get us somewhere closer to the present tense with this blog deelio.  But before I do, I want to wrap up our first trip to Guanajuato and the rest of our initial 2008 visit to this part of Mexico which has held our attention for so many years. 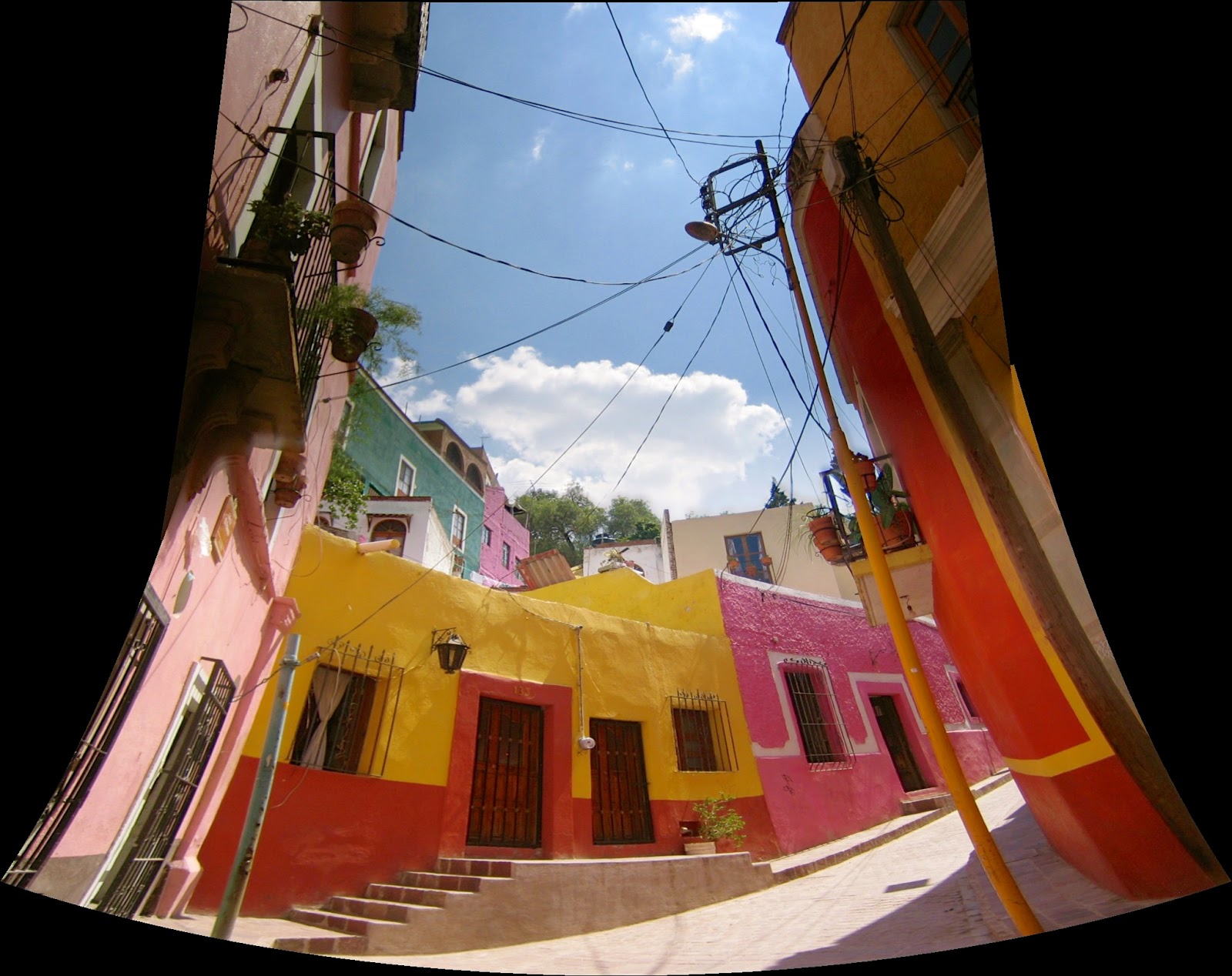 After spending four nights in San Miguel, we repacked the backpacks and hopped on the 90 minute second class bus to Guanajuato (if you're flying Air Slaugh, you're flying Coach).  We found that this town is somehow even more adventurously colorful than San Miguel.  This might be a bit much for some Northern European temperaments, but Tracy and I have long ago abandoned the taste for beige, burgundy and taupe.  All the same, Guanajuato was like a visual jolt of espresso. 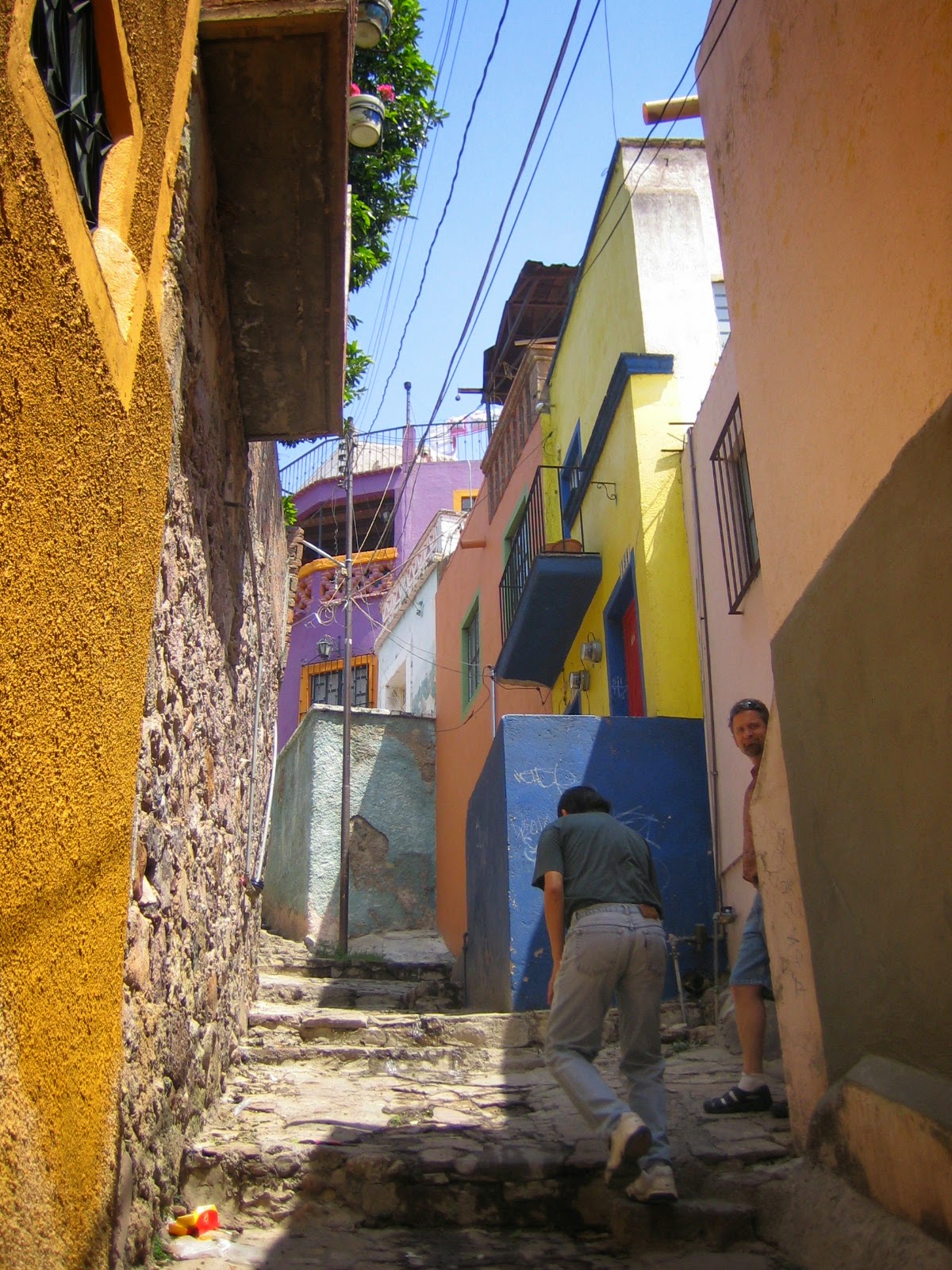 It's also laid out, if that's a phrase that even applies to such a place, in the wildest and most organic way possible.  Whereas San Miguel is organized in a way that more or less makes a nod toward some idea of a grid (albeit crossbred with a web spun by a dyslexic spider), the streets and callejons (alleyways only big enough for walking) of Guanajuato seem to have totally grown like a series of neurons from many hubs around the valley it's located in.  And like neurons, you're not really sure how the whole thing actually works, but somehow it totally does.

It's also reminiscent of someone dropping an entire pot of spaghetti on top of a gopher hole, each strand a street flowing over the mounds of dirt and down into the space below. 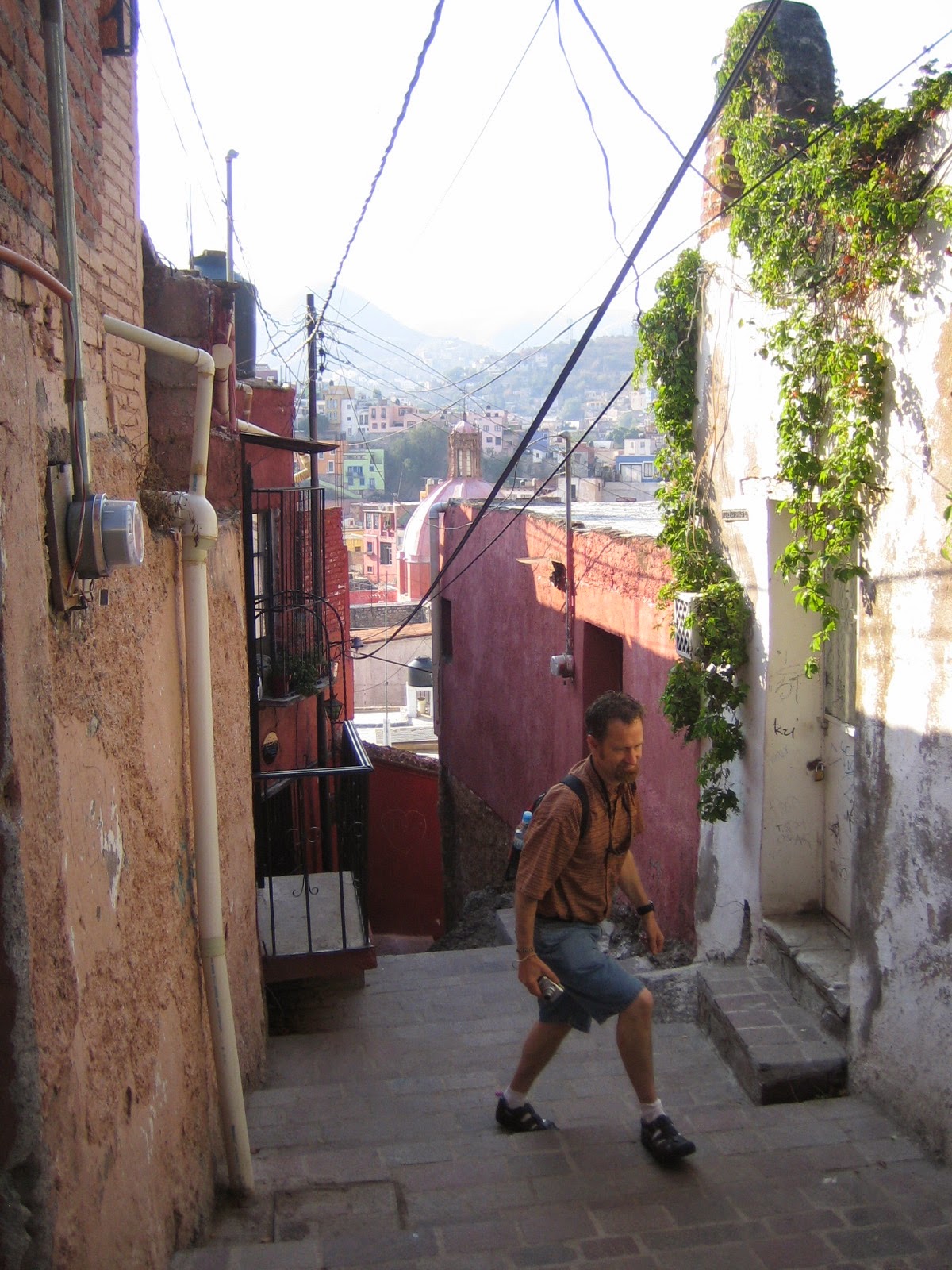 However, calling them streets does not really give you a sense of what the passageways of this place are like, as many of them are really too narrow for even one-way traffic, and many of the callejons are essentially cobbled-over trails with the occasional stairway worming its way up through all these colorful stuccoed buildings.  What I'm trying to say is that, like Taxco, the space in Guanajuato is superwack, with the amazing addition of full spectrum color.

It's also much bigger than Taxco, and you get the feeling that it would take a really long time to explore all of its polytechnic nooks and crannies. What should be a horizontal landscape is almost always extremely vertical, and what should be a level surface to walk on is usually set at a 45 degree angle.  Even those streets where cars are actually allowed are ones I am personally glad I am not expected to drive. 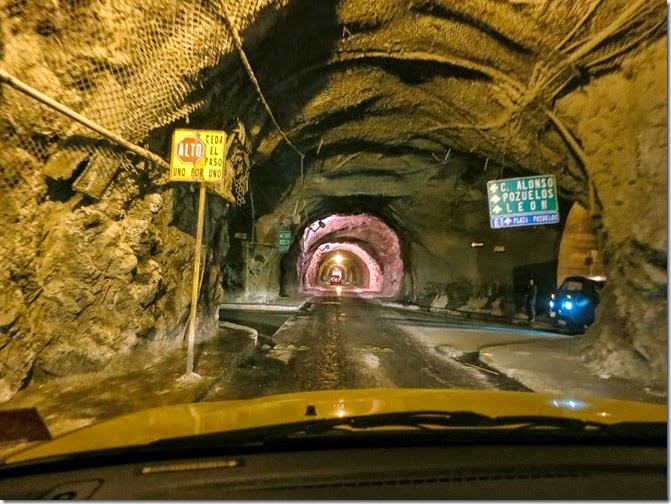 Actually, before noticing the color blitzkrieg and the trippy space upstairs, the first thing that struck me in Guanajuato is that the whole city has a network of tunnels running under it.  As I recall, we popped up and down into them a couple of times as we entered town in a taxi from the bus station, and we saw several openings to this subway-for-autos later as we walked around the town snapping pictures.  You can read all about the history of the whys and wherefores of this on Wikipedia, so I'm just going to talk about our own experiences here, which was a little reminiscent of being in a Hogan's Heroes episode. 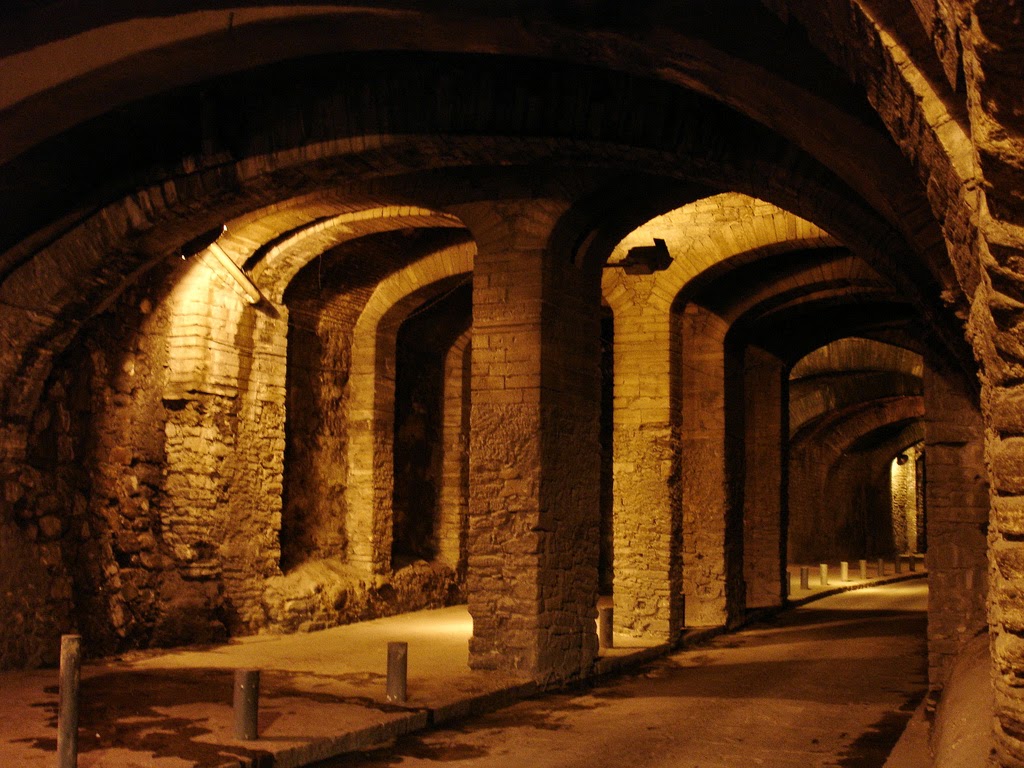 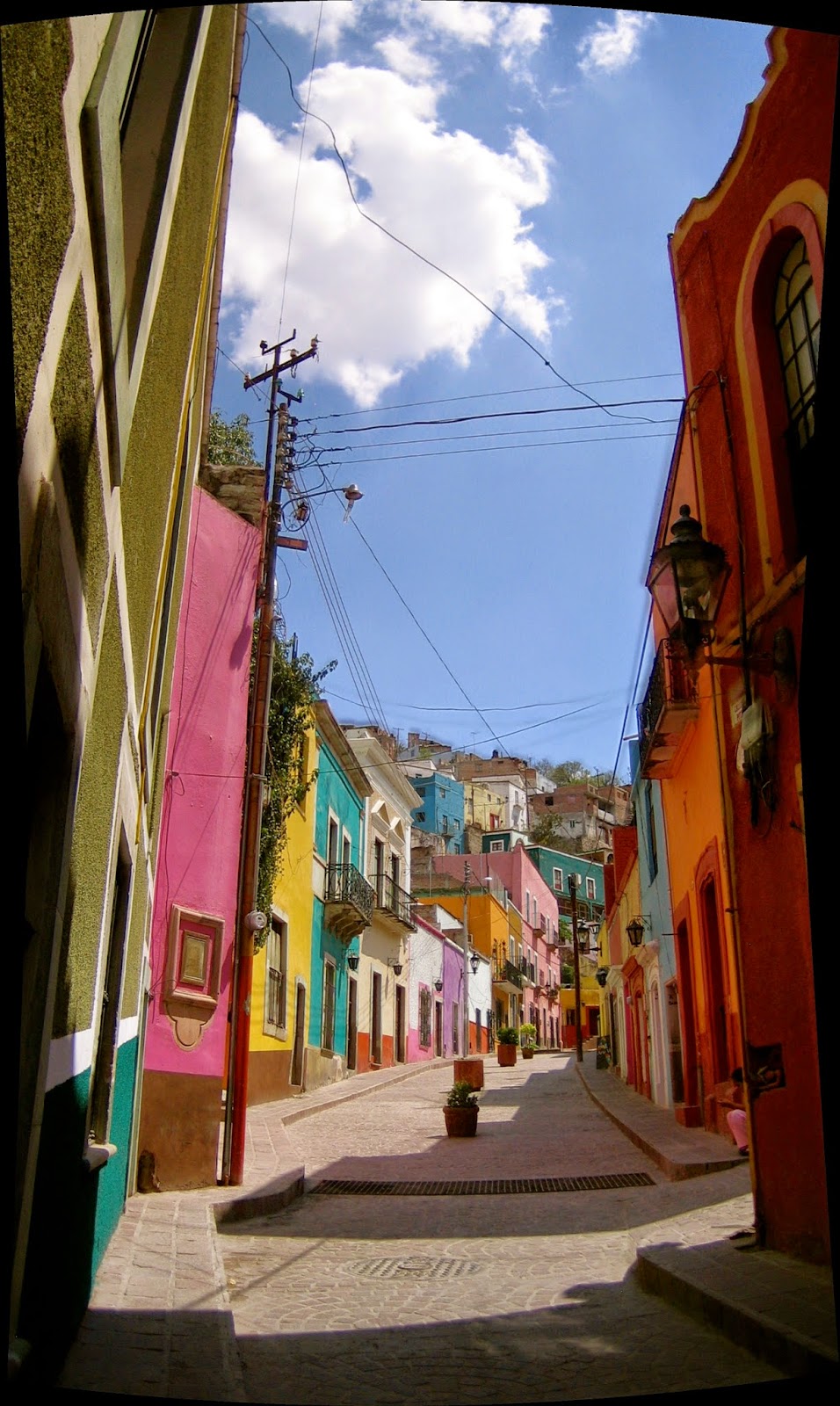 I'm not a big fan of spelunking in general, as there are too many bats, roaches and pee pee smells in your typical tunnel/cave/New York Subway Station for my taste.  But this popping in and out of the auto tunnels of Guanajuato is a solidly synapse carbonating bonus, IMHO.  One moment you are in a colorless claustrophobic subterranean space and the next you have popped up into Candyland. 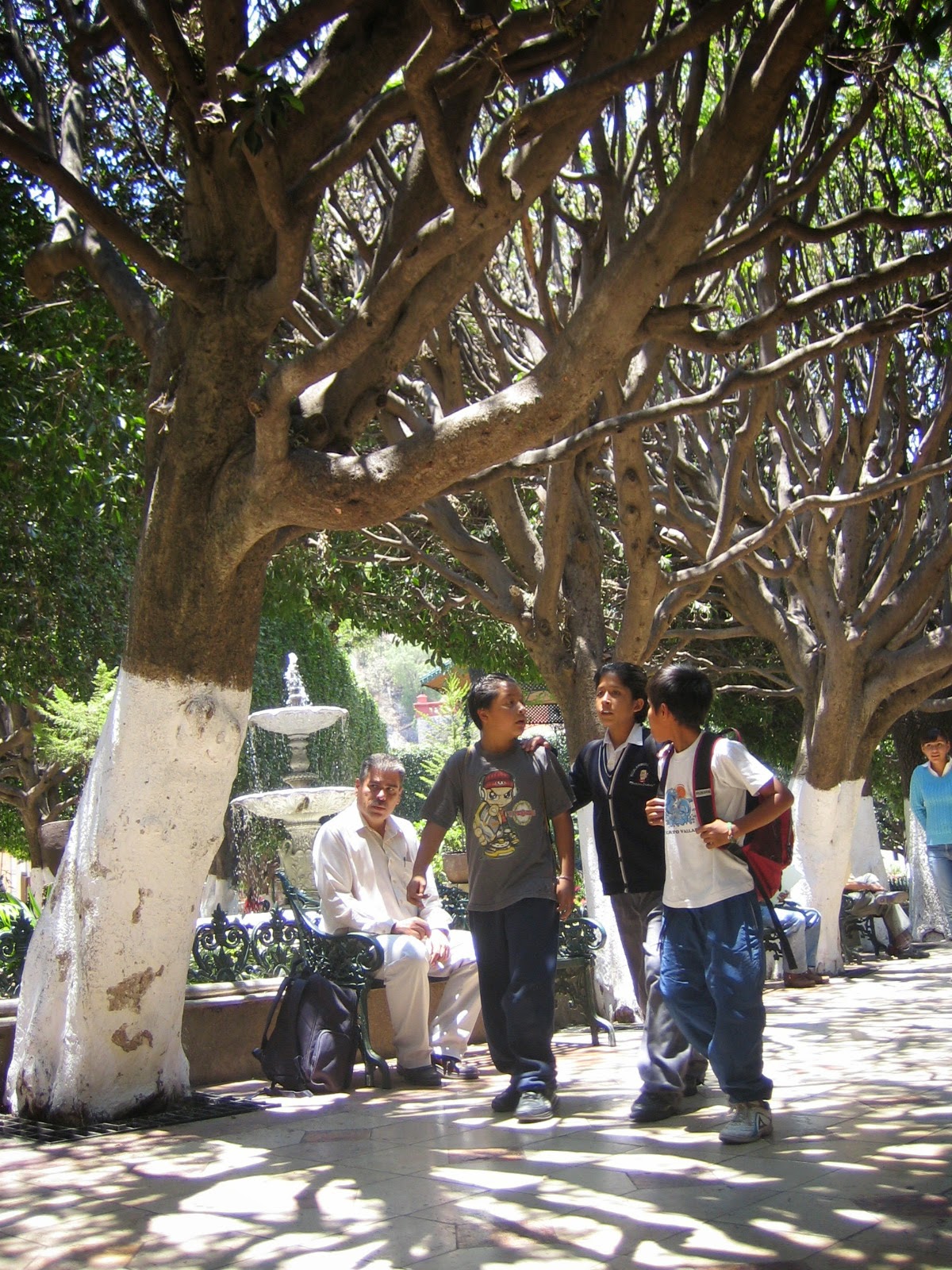 Another striking thing we noticed about the town is the Central Square, which was treelined like San Miguel's, but which had extremely dappled light and was terrific for people watching.  As we sat down that first night to have a quiet meal here, there were no fewer than three mariachi bands as well as a couple of Norteno outfits all playing at the same time.  Guanajuato doesn't really do Peace and Quiet.


Guanajuato is also a College Town, full of students of one of Mexico's major Universities walking up and down its streets. 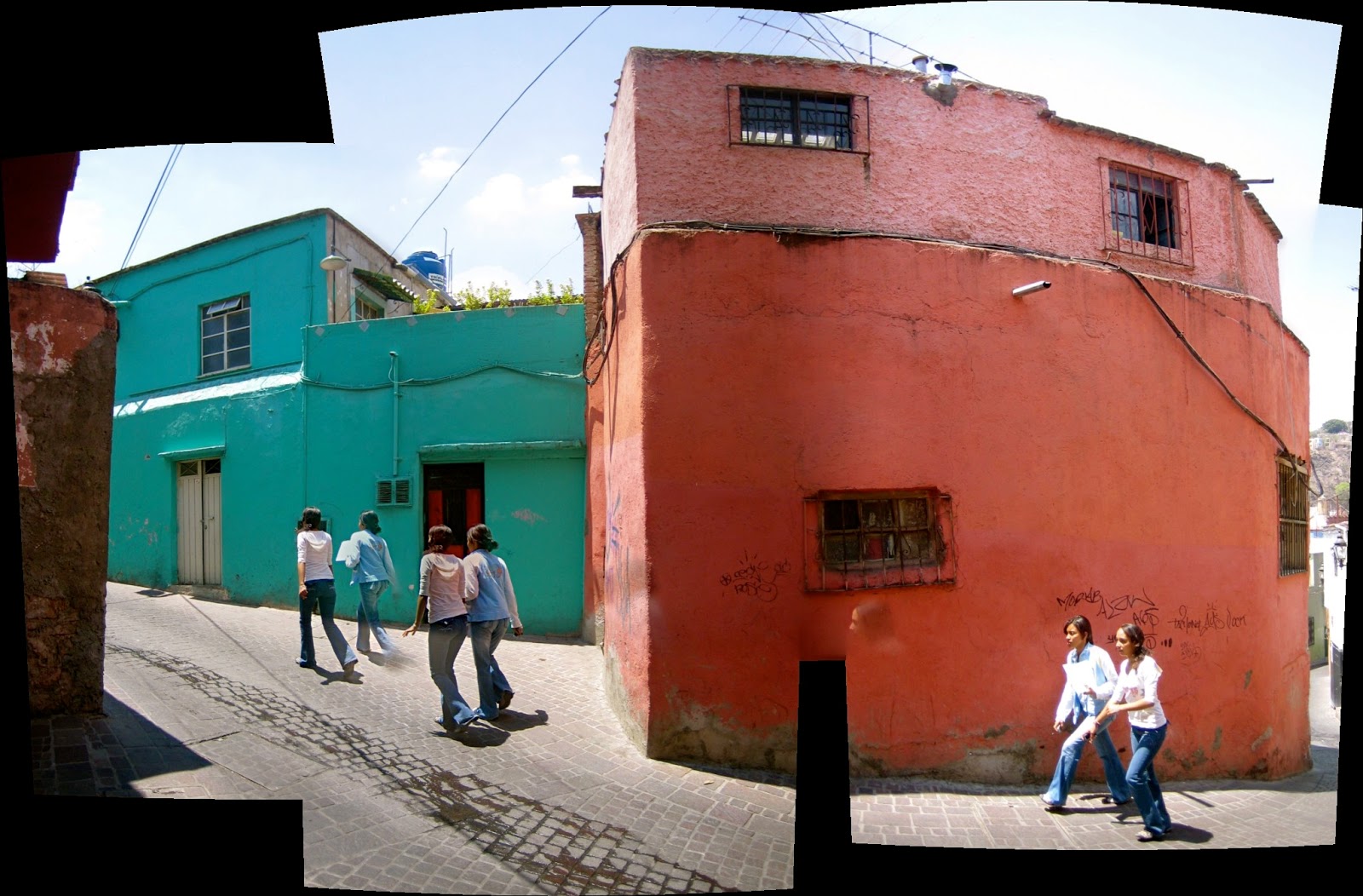 Interestingly, it's also a town with a serious Cervantes obsession:

Every year Guanajuato holds an international Festival called the Cervantino that draws people from all over the world (again, sadly not when we were there), similar to the Cedar City Shakespearean Festival in my home state of Utah, which I somewhat shamefacedly confess I've never actually been to, even though it's only four hours from my front stoop.

However, in my defense, if Cedar City looked like Guanajuato instead of the McHomes Legoland Sprawl-O-Rama it has become since I graduated from High School I'd be there every year.  Yeah, that's right, Cedar City, I'm callin you OUT.

Of course, it's not just Cedar City that bums me out in this way, Dear Reader.  It seems like my entire home country is hellbent on becoming a jive plastic coast-to-coast stripmall, complete with regularly occurring Winger's and eight other McChains, all designed by the same anonymous architecture school flunky and serving the same bogus foodlike Soylents that are turning us all quickly into extras from Wall-E, with a nod to the set of Bladerunner in the host of LED Billboards stretching off in all directions, obscuring whatever landscape our ancestors may have once admired.  That's right, U.S.  I'm callin you OUT with three separate movie references in the same run-on sentence.


I reckon the fact that these two locales have nothing to do with their festival's Patron Saints is testament to the sheer enthusiasm of their founders and the devotion of those who keep the flames fanned year after year.

There's also a very impressive Don Quixote Museum in Guanajuato with traditional and Contemporary art from all over the world referencing Cervantes Iconography, and every night of the year there are college students dressed in 17th Century period costume performing callejoneadas, which consist of guiding small groups of people through the darkening alleyways of this crazy town, telling stories, performing skits and playing songs on traditional instruments while the audience members walk along behind, drinking wine from small ceramic flasks that they give to you at the end as souvenirs.

That is also decidedly not happening in Iron County, Utah. 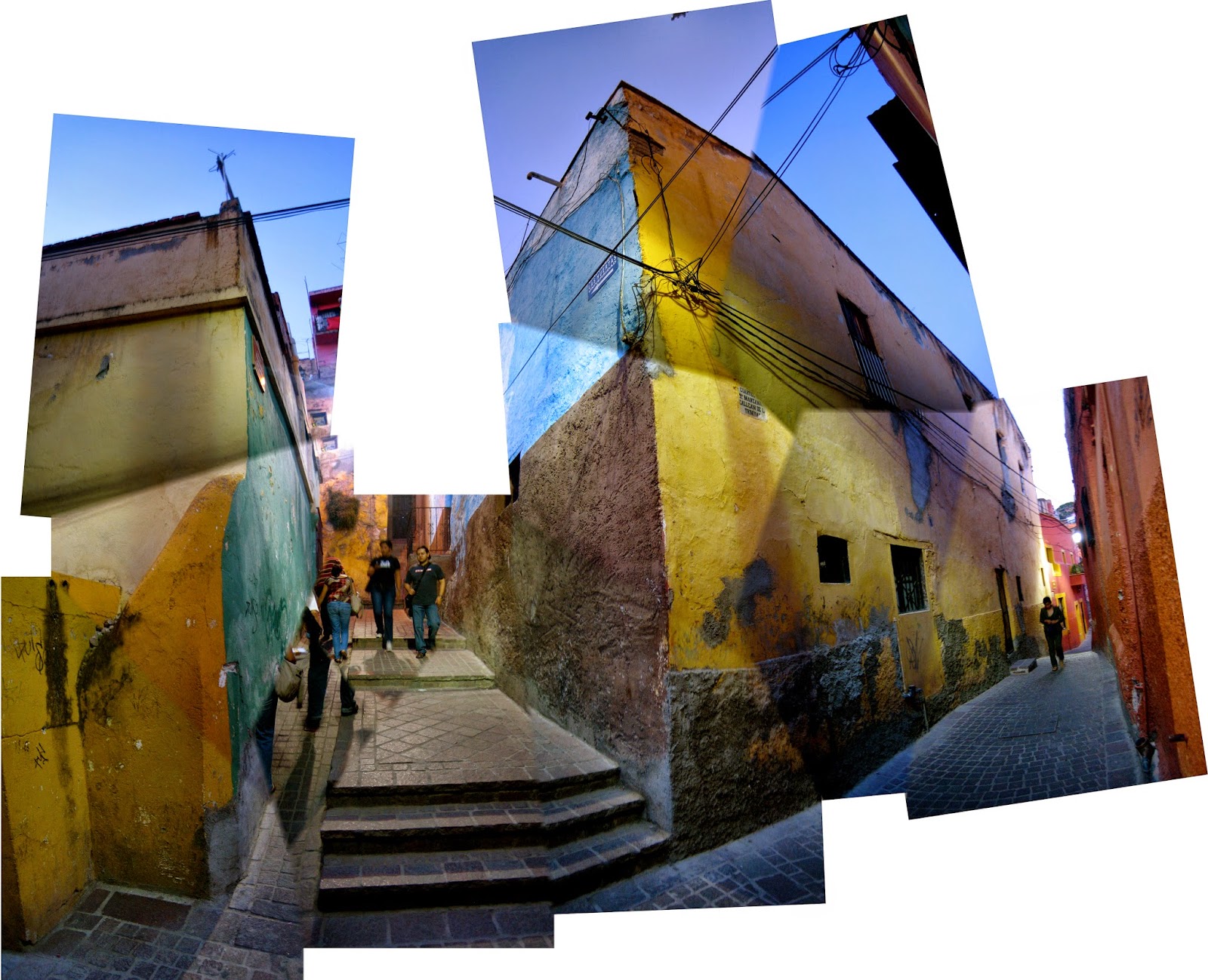 Alas, we didn't go on one of these, fun as they sounded, as it was felt that my Spanish was too utterly and embarrassingly minimal to get the full benefit, but I did take some super blurry pictures of one that I happened upon, not realizing the wall I was leaning against to steady myself was crawling with flying ants.  Luckily, the hombre next to me tapped me on the shoulder and pointed it out in time for me to deal with the situation.  Silly Guero, he perhaps thought as I slapped them off of my shoulder and neck in the deepening darkness. 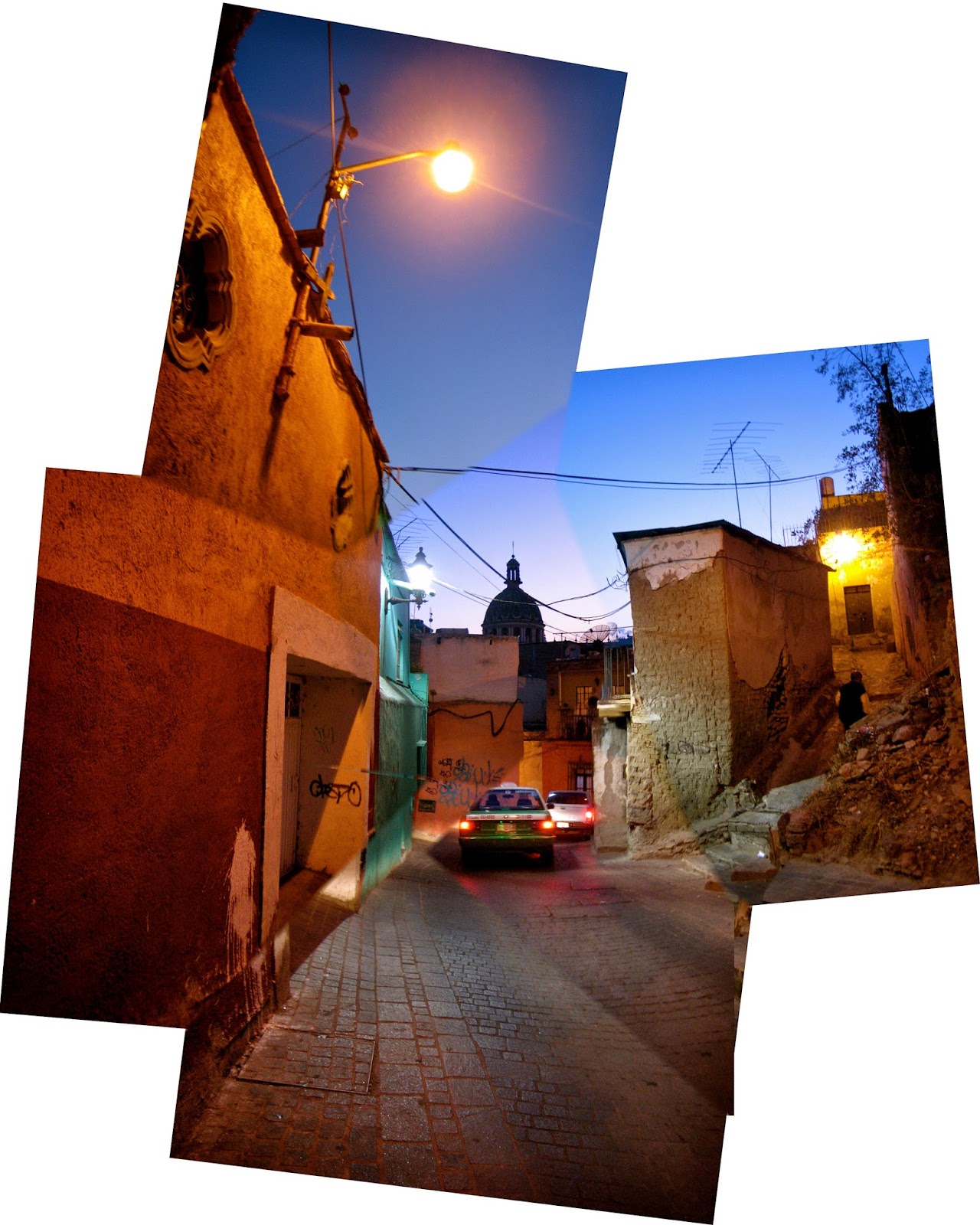 Still, as dusk began to fall on Guanajuato, slowly surrendering into night, we noticed immediately that the callejons and plazas of this town began to be transformed into something really magical.  The combination of the strange cobblestoned spaces, the streetlights playing on the colorful buildings and the narrow vertical spaces, increasingly muted by the darkness, was irresistible.

We pulled out both cameras and started to go to town with them, thinking perhaps we might be able to stitch something interesting together later when we got back to Salt Lake. 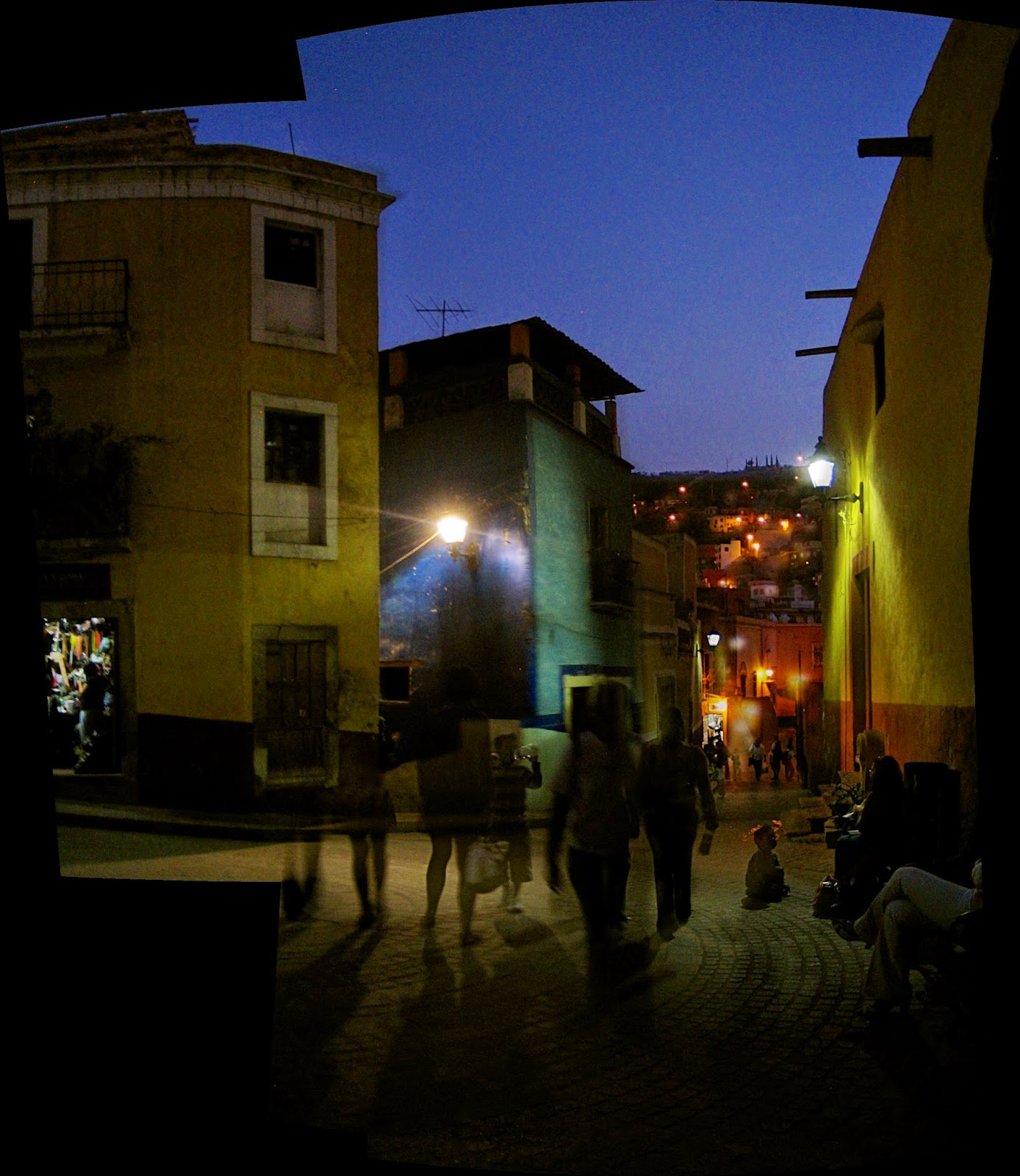 For three nights, we prowled around Guanajuato during that perfect interval when the streetlights began to dominate the sky until it was so dark that the cameras were only taking blurry photos, and all the color was gone. 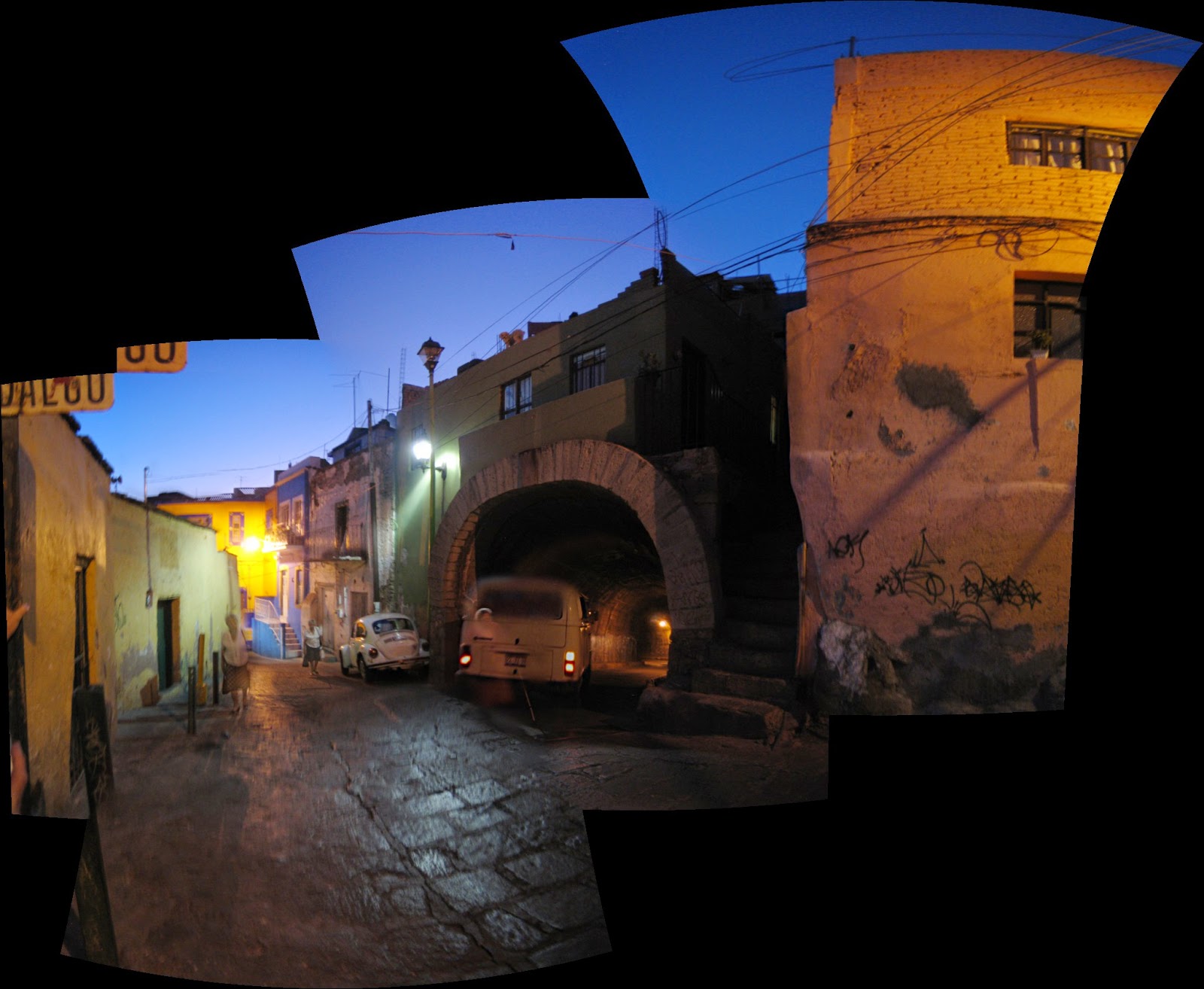 One of these days, one or both of us will need to make some art from these, we thought.
Posted by Brad at 10:41 AM