Tracy and I were in Taxco looking at pictures of Guanajuato on the internet in a little room off the lobby of the Hotel Victoria.  It was May 2008.  We had returned to Mexico after nearly 3 years, this time on the (tax deductible!) pretext of doing research and gathering additional reference material for a show that Tracy had been invited to hang at the Loge Gallery of Pioneer Memorial Theater that December.  We were, it is true, also doing some limited research on mezcal, which the locals drink with salt ground up with something mysterious and exotic called jumil (pronounced hu-Meel).  Turns out jumil is an edible beetle, a stink bug actually (!), that migrates through town every November with several million of his buddies, and around which there is an entire festival centered.  The folks grind em, roast em, and even eat them raw.  We weren't there during this time of year (thank God), but we did try the jumil salt chased by the mezcal in a little clay shooter made just for the ritual.  It was all right, but it decidedly did not taste like chicken.

(Side note:  How is a Fiesta based entirely around eating stink bugs not called the Jumiliacion?  C'mon, Mexico!  Missed opportunity!)

Anyhoo, this time we'd brought 2 digital cameras with us and had shot, including our first trip, over 800 photos of Taxco, and we were starting to feel like it was time to move on.

Our original plan was to go south back to Oaxaca, where we'd only spent a few days back in December of '05, but I was balking at the 8-9 hour bus ride this would entail.  Then Tracy started talking about a couple of towns up north she'd visited years before, and showed me some pictures that looked a bit like the panorama at the top of this post.  Wowsers.

She also mentioned that if we went to Guanajuato we might as well stop for a couple of days in a town on the way called San Miguel de Allende where she'd once spent a freezing Easter Eve trying to sleep on the roof of a hostel with some other students she was traveling with (one of whom was trying to get amorous all night long on the pretext of conserving body heat).

I thought this place looked pretty groovy too, and it was only a five hour (second class) bus ride away!  Even more palatable if we broke it down and made our way up there stopping in maybe one or two other towns along the way, we reasoned.

I hoped we would be able to find subject matter that was as interesting as the town we were leaving, but these two cities seemed really colorful, which would be very different from our experience of the unified white gestalt of Taxco.  At the same time they're both set on hilly terrain and would give us the up/down space we were interested in.

Unfortunately, we discovered at the very first city we came to (Toluca) that not every town in Mexico is equally picturesque.  We were trying to skirt La Ciudad to avoid as much as possible the Cloud of bad air that hovers over the Greater Mexico City Area, as Tracy was recovering from some bad respiratory gumboo.  Even when you're healthy, you can actually feel the air of that town mucking up your bronchioles every time you pass through it, and you spend all day clearing out your throat.

(Another side note:  It's noticeably better now due to lots of progressive steps in the last decade by the Mexican Government, but still not what one would call Bueno.  Tracy and I've spent a few days in De Efe but overall we figure if we want to breathe crappy air, we can just stay home in Salt Lake.)

On a lark, we spent one or two enjoyable nights in a little resort town called Valle de Bravo, which is apparently world famous for parasailing as well as watching the monarch butterfly migration at a certain time of the year (not when we were there, however), but we decided we just needed to head north to the towns we wanted to see.  This place was the first time a street vendor ever called me Guero, which I thought was awesome.


Alas, we took a bad turn on the wrong bus, which ironically ended up tacking a couple of hours onto our journey and even more ironically plopped us right back into the middle of Mexico City and The Cloud, but after some time in the terminal with Tracy using her magic Spanish words between coughs, we made it onto the right bus, one without obnoxious video screens, though it became quickly clear that San Miguel was on the other side of five hours of Mexican Polka music from the direction of the driver.  Fortunately, we had learned our lesson three years before and had packed foam earplugs.  I'm actually a pretty big fan of the accordion but Ay Caramba! Enough is decidedly enough, Amigo.

Tracy and I finally arrived in San Miguel, exhausted from a long day traveling, just as it was beginning to grow dark.  We splurged and took a taxi from the bus station to the center of town rather than walking, which in Taxco is called the Zocalo, but in San Miguel is called the Jardin, a beautiful tree-lined square dominated by a majestic cathedral called the Parroquia that is even more impressive than Taxco's Santa Prisca.  I'm not what anyone would call a Believer, but I have to say that it's hard for me to imagine a group of atheists building something so formidable.


We dropped our backpacks off at the lovely Bed and Breakfast recommended in the Lonely Planet guide, and returned to the Jardin.  There was a slight sprinkling of rain as we strolled with our cameras, and the square was dotted with people just hanging out and enjoying the beautiful night atmosphere.

I'm really going to like it here, I thought.

About this time we were missing the kids quite a bit, so I shot a little video for them:


It was dark enough that we really didn't have a sense of just how colorful the town we had just entered in fact was.  But the next day, as we began walking around, it quickly became clear that we had stepped into someplace pretty amazing.

It was actually hard to find anything in this town that wasn't just super interesting to look at.  The light glows off everything in a crisp, fully saturated way, and the town somehow pulled off being incredibly colorful without ever being garish.  I had no clue how this could be accomplished on the scale of an entire town, but we've subsequently learned that in the Centro Historico, you get to choose from a predefined and well-thought-out set of harmonic colors, after which the city will paint your house for you.  Having just had our house painted in Salt Lake before we left a month or so ago, this sounds like a pretty sweet deal to me. 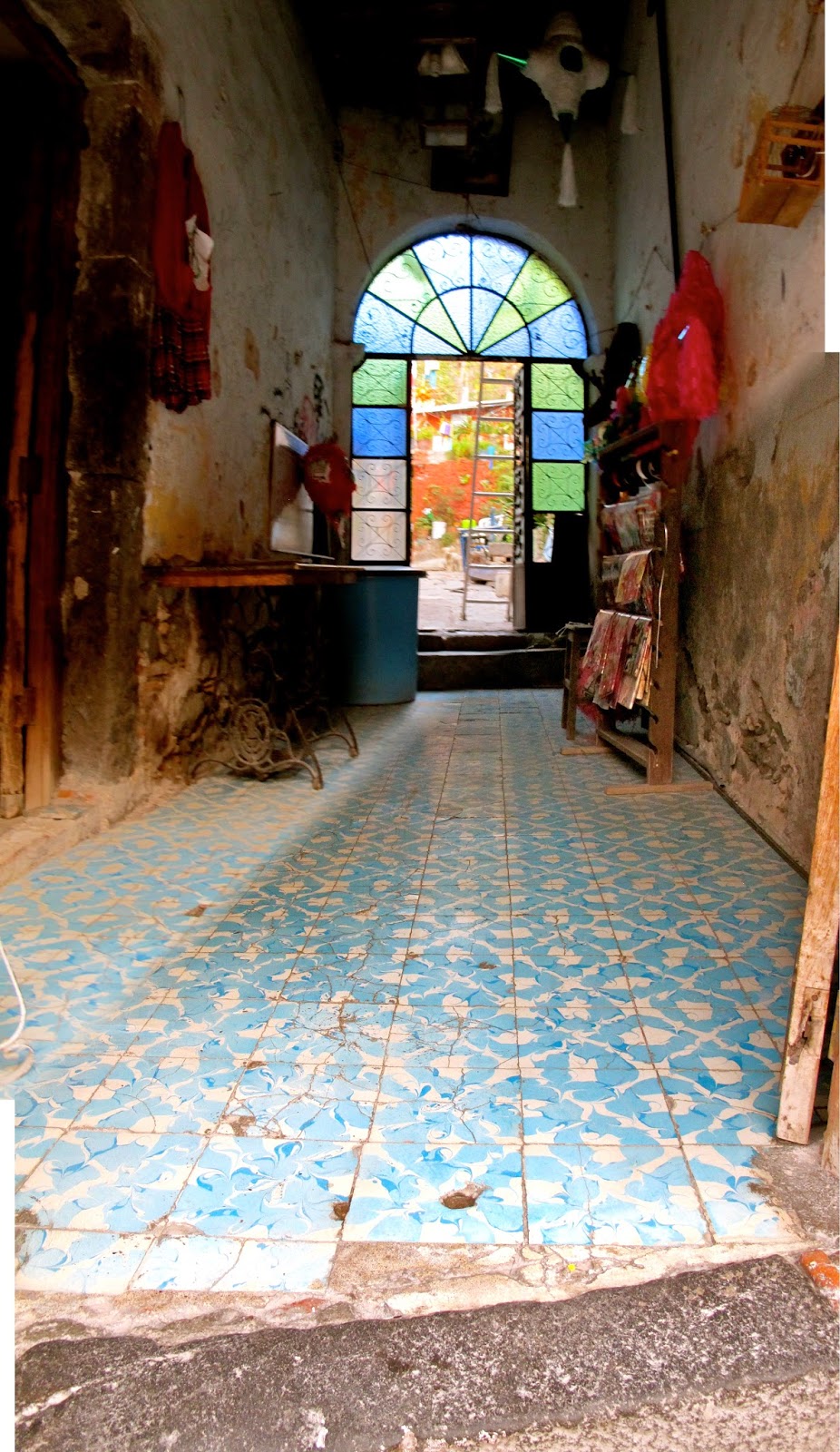 We began snapping pictures like possessed people, and whereas we thought the 874 photos we'd taken in Taxco was an impressive number, as of this writing we're now at slightly more than 7,900 in San Miguel and Guanajuato combined.  True, many of the photos are blurry, mediocre and completely unusable as reference, and some of them involve small people traveling with us putting rabbit ears behind the heads of bigger people (and thinking that's just the most hilarious thing in the world), but we have been able to stitch a few into some kind of compositional shape, and there's a million little gems that you see when you are just out walking around. 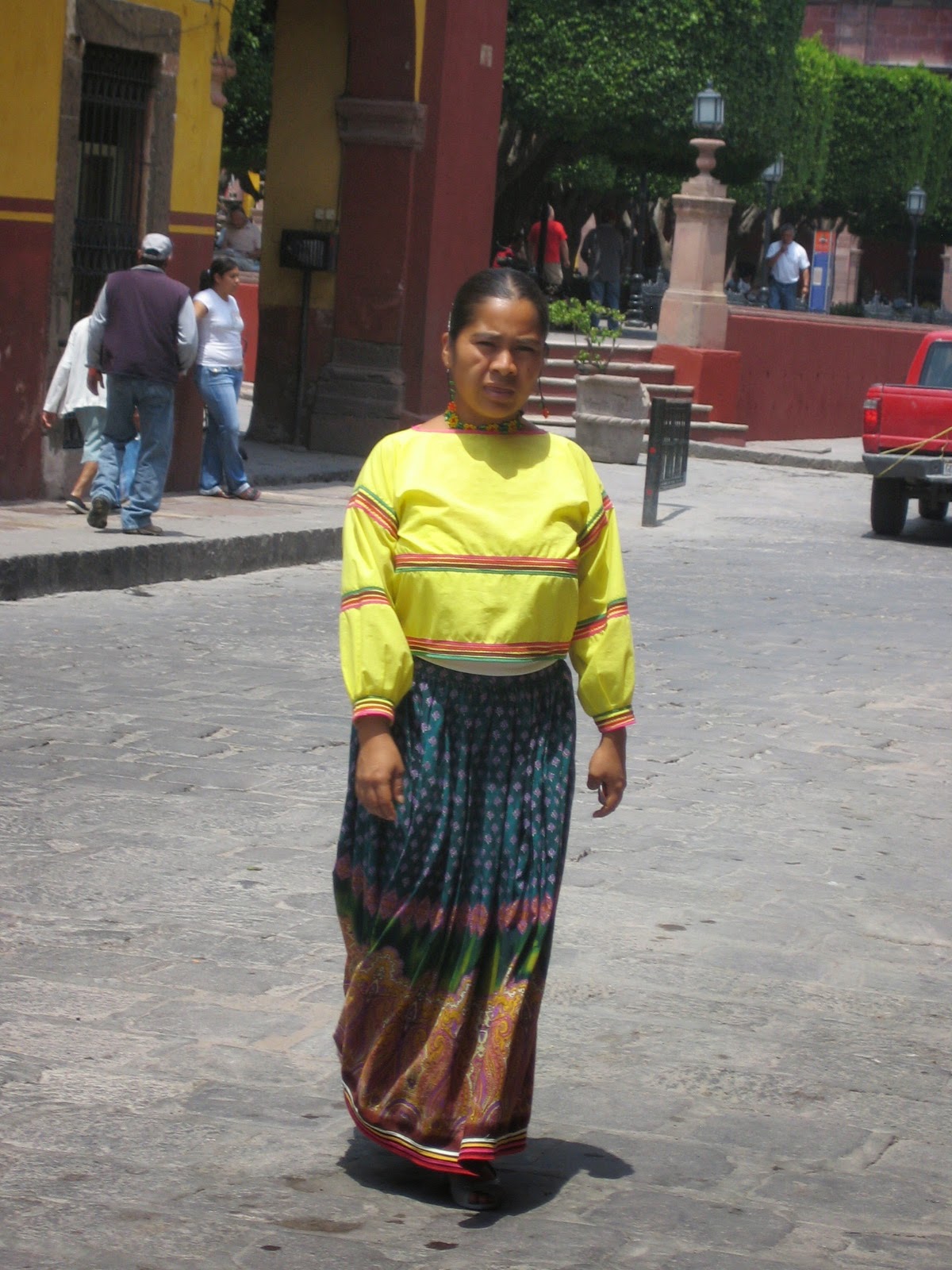 Of course, Tracy's been the one who has made the most of the material we've gathered in this town and its neighbor Guanajuato, and her show of mixed media works in December '08 was truly outstanding.

She assembled the photo montages manually with Scotch tape on foam core a la David Hockney and worked from them that way, as we hadn't fully figured out how to do it in Photoshop yet, and she would bring a person from one environment and put them in another in a way that was extremely cool and very unfussy.


I learned a lot from Tracy, watching her process over those months.  Almost every painting and drawing she made in this series has also found a very groovy home to live in, though it took a while for people to come around and open their hearts and wallets. The groovy home this one found, however, is ours: 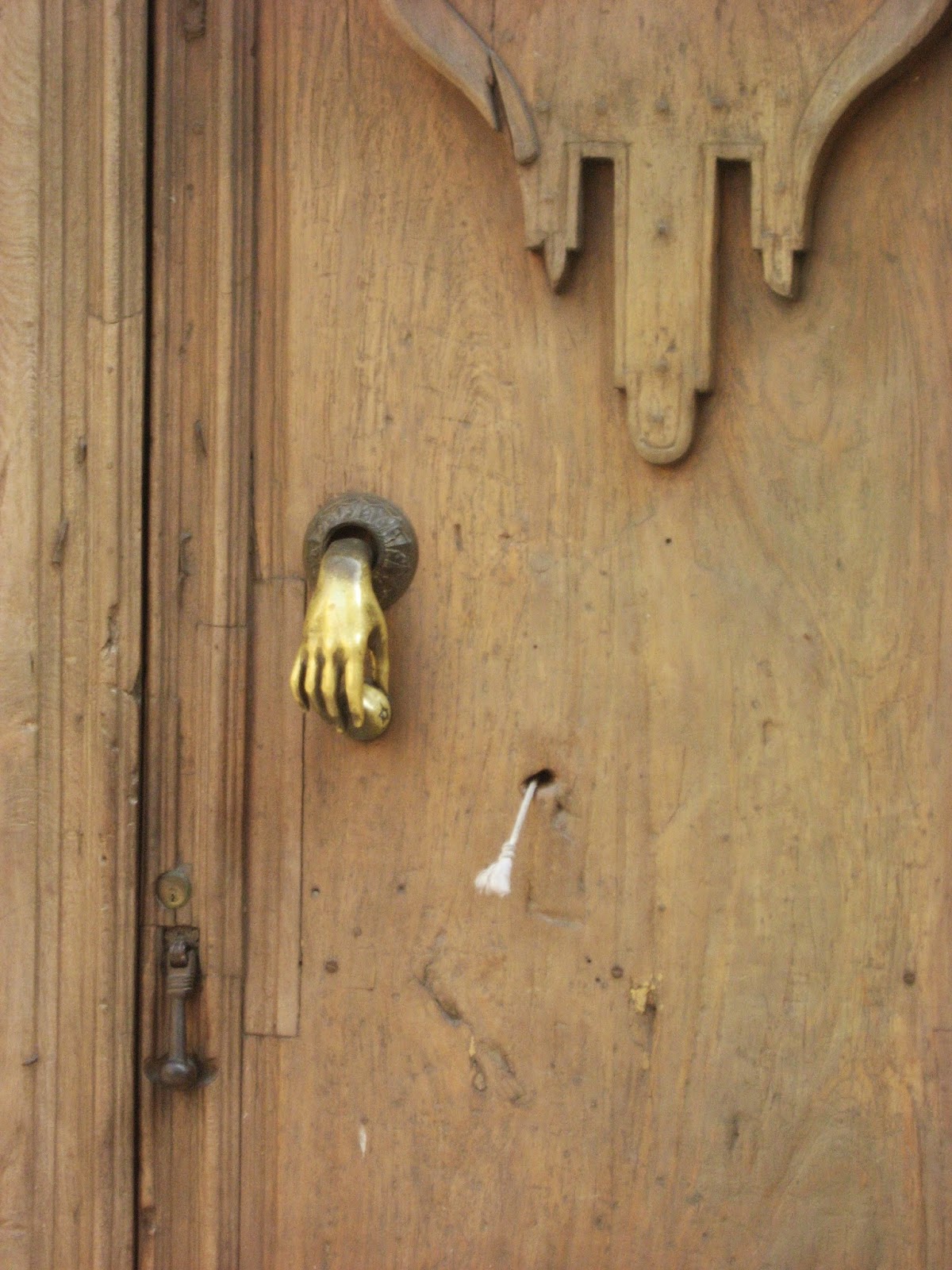 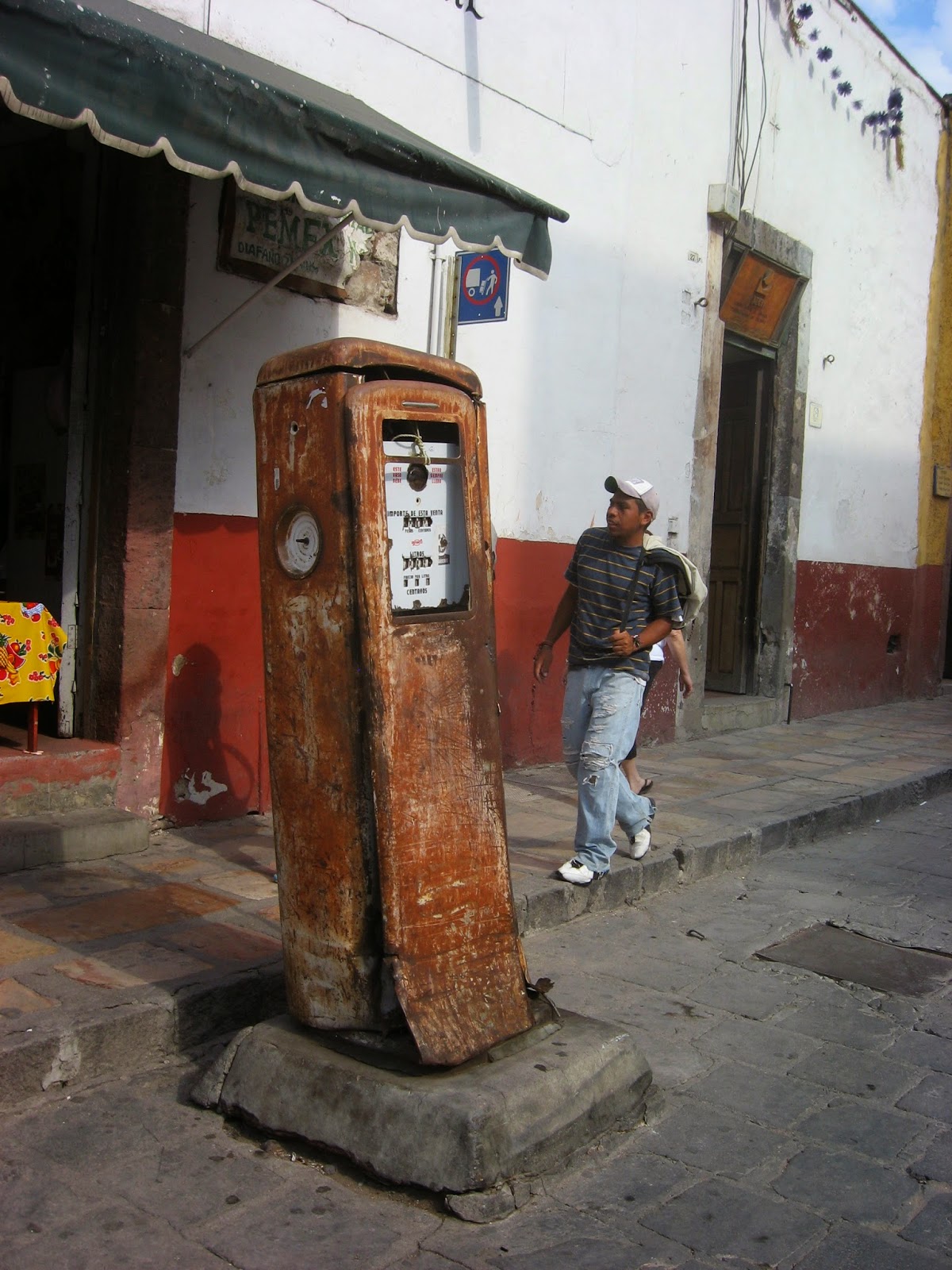 We both fell instantly in love with San Miguel, and while we initially planned to stay perhaps one or at most two nights on our way to Guanajuato, we ended up staying twice that long on our first trip, wandering through the alleys and curving streets, taking pictures and sampling as much of the local fare and culture as possible.

The people in San Miguel are as amazing to photograph as the architecture is, and everywhere we looked there were details that startled, surprised and, as corny as it sounds, delighted us. 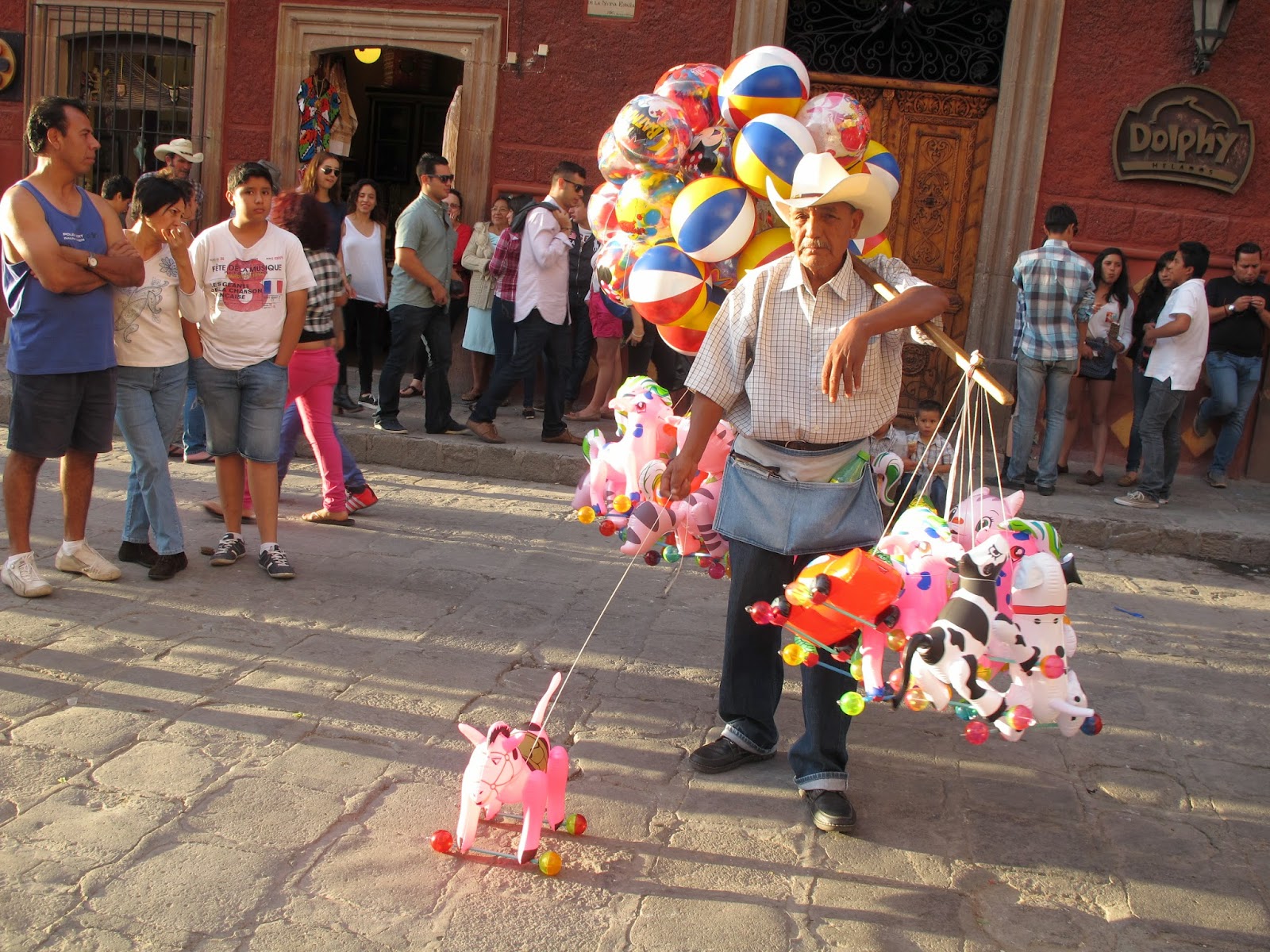 There are lots of places I've gone in this world that just a whole bunch of people seem to really want to live in.  New York, for instance, which I can personally spend about 3 days in before I want to flee like it was Superstorm Sandy hitting during a bedbug convention.  Still, I suppose eight million people can't be wrong, yes?

I could probably also live in LA, though I doubt I could ever really love that town, despite the fact that both these cities have amazing art museums, endless cuisine options and very lively creative communities.


I sometimes joke that I live in Salt Lake because it's a great town to take vacations from, but I do have a real affection for the place, though it's the affection of someone who's been married for nearly 50 years to a very nice person who also smacks when they eat.  There's something to be said for knowing where everything is:  all 3 Home Depots, which mechanic won't rip you off, where to get good olives, what time the wine store closes, and which bakery can transport you to Paris if you close your eyes while taking a bite of the pain au chocolate.

It's also where nearly all our dearest and most amazing friends are. 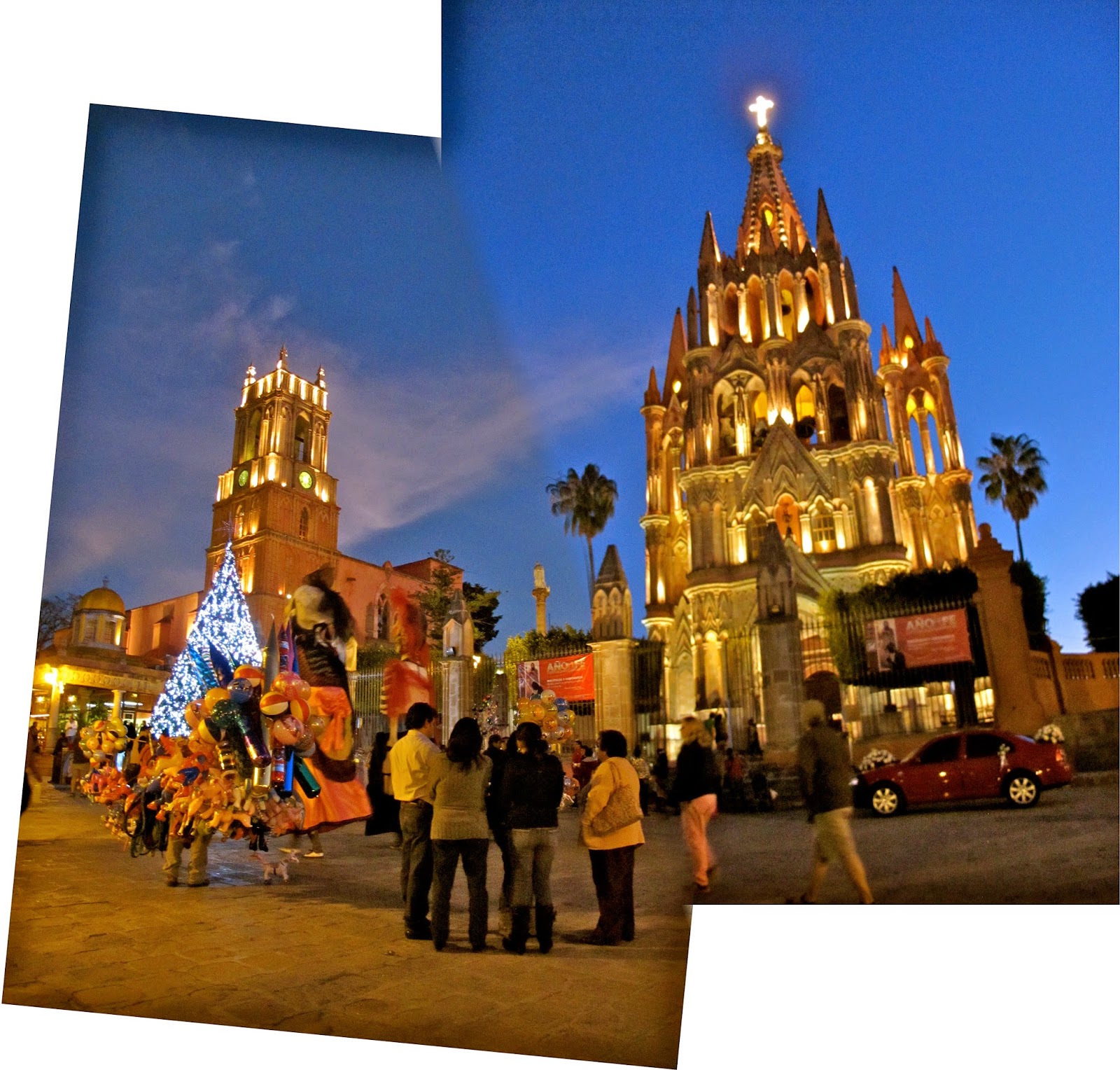 Still, there's only a handful of places I've been in the world that have made me fall in love with them instantly.  I'd put Paris and Bruges on that list, as well as Port Townsend, Washington.  Not really so much of a Big City guy it turns out, with the exception of Paris (though DC is completely underrated).  I could totally hang for a serious amount of time around San Remy De Provence, Arles or Nice, for instance.

But ever since stepping foot into San Miguel de Allende, Tracy and I kept asking each other the same question:  "Could you ever live here, at all?"